In 2012, Executive Director and Founder, Provincial Constable Patrick Armstrong was nominated as a nominee for the annual Bank of Nova Scotia 'Game Changer'.  This program is to highlight those across Canada who have helped their communities.

Patrick was selected as a Regional Winner for the Hamilton Tiger Cats and attended a game with Board members and received the game ball and a jersey.

Though not a grand winner, the contest provided great exposure for the Dave Mounsey memorial Fund and Scotiabank donated $1000 to the Fund.

The game ball was donated to the widow of Dave mounsey. 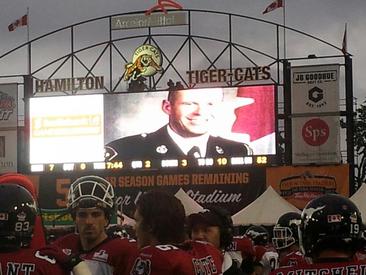